Anyway, 2 of these metal fenceposts were "out of plane" with the trees. For those of you non-math folks that means not in the same line as the trees.

Anyway, couple of weeks ago I removed 8 inches of gravel, and dug a 2 foot hole to finagle one out. That took 45 minutes or an hour.

This weekend I decided to tackle the other one. So, I removed 8 inches of gravel and then decided to loosen it up a bit. So I grabbed the post with 2 hands and started rocking. I had a pretty good rhythm going probably moving the top of the post a foot off center each way. So I was on a back swing and the post decided it had had enough and snapped off under ground.

As I was flying backwards through the air I briefly had the thought, "this is gonna hurt". I landed hard, then took a fencepost to the forehead. "Ouch" I said. I sat up, shook my head and got up to see where it broke. Alicia was on her way over to check on me. She asked if she could get me anything about the same time I noticed a drop of blood hit the ground. I asked for a paper towel and decided I'd better sit down.

She brought a paper towel at which time I requested a band-aid.

Anyway, long story short. I'm fine (my wound is still oozing), the hole is filled in in the yard, and I've got a good conversation piece for Halloween parties.

I'll post pictures of the kids later (cause I know that's the real reason you all read the blog).

So I have myself a point for accomplishing my goal. I gave the fencepost 1/4 point for going down with a fight. 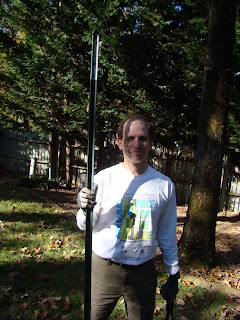 Oh, that sounds painful. Glad it didn't involve a trip to the ER and stitches. That would've ruined the rest of the day! Remember your physics--force, equal reaction, and all that. We'll wait patiently for news about the camping trip, Tiger Cubs, Emily's preschool experiences, chimes, soccer, first grade, Halloween costumes, etc.

I'm so glad that you weren't seriously hurt.