Note: Blogger seems to be working better again. It will once again detect pictures that need to be rotated and rotate them for me. Yea!

Note2: IE 7 seems to be having problems with the change that I made to the blog. I'm working on fixing it but it will take a while to make it through all of the posts. This only affects pictures in older posts. I'll work my way backwards over time fixing it but it could take me a bit.

So when talking to Oma and Opa today Opa inquired if Emily played with tools, or something to that effect. (I was up on a ladder swapping out a light socket so I wasn't paying a whole lot of attention to the conversation. I was more concerned with not falling off the ladder or zapping myself.) Anyway, shortly after we got off the phone Emily grabbed my screwdriver and started working on her chair. 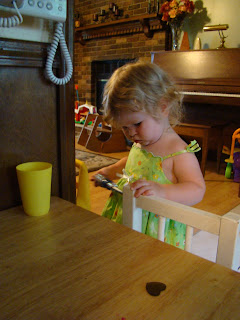 In other news, last week was VBS for Eli. They had a "Rainforest Adventure". Talked about sharing, helping others, etc. We went to the program Thursday night, yup, even kept Emily up. Though she's been going to bed at 7:30 so it wasn't too bad, basically got home just in time to put her to bed. Anyway, here's a picture of him "performing" during the program. This was actually taken during their rehersal. During the show folks kept putting their heads in the way. 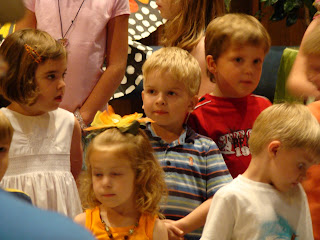 And lastly, on Saturday a neighbor was having a garage sale so we loaned them our deck table. They gave Eli some Legos that he wanted to play with on the deck while Alicia and I worked in the yard. So, we took the kids' table outside. When cleaning up for lunch he coopted Emily into helping him carry the table in. We jokingly refer to him as Tom Sawyer on occasion for his ability to talk others into helping him with stuff. 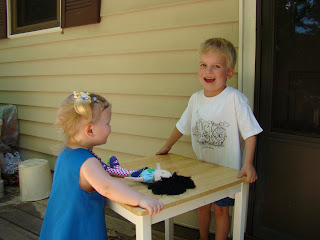 Well, I couldn't get the kids to sing even after we were off the phone. Perhaps sometime in person.

Here's the cake Eli made for Nana. It's chocolate-pecan cake with blueberries and powdered sugar on top. Plus some candles.

And Eli has finally beaten the wildlife and gotten a ripe blueberry off of his blueberry bush. It could be the bird netting we added.