Whew, another Halloween complete.
First there was the obligatory pumpkin carving.  Both kids got into it this year:
First you've gotta clean it out 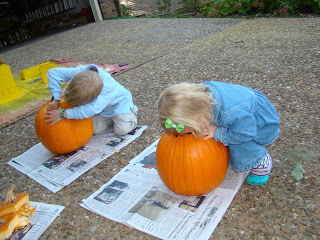 Then draw on the face 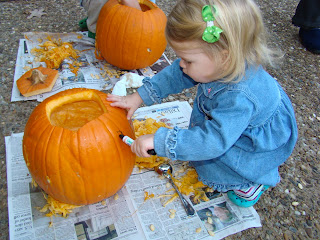 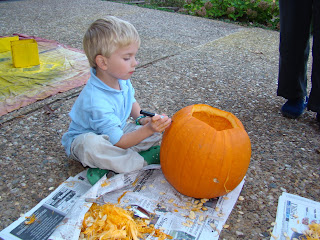 We even let Eli carve his own this year, tongue out helps :) 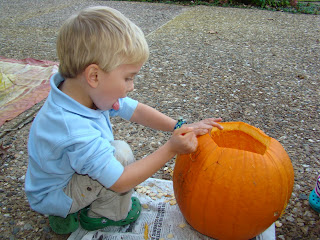 Eli decided that he wanted to go as Scoop.  This has changed several times over the last 12 months but he decided on his own.  So we gathered some boxes and he and Alicia set to making a Scoop outfit.  I must say they did a pretty good job.  Emily went as a lady bug (custom crafted by Alicia as well). 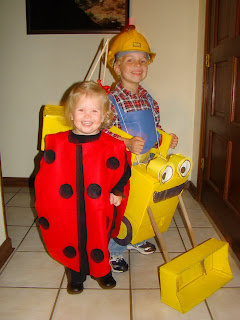 Ever organized Emily made sure the candy was organized. 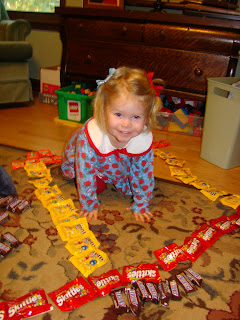 Since wearing a backhoe to school would be a bit cumbersome Eli decided to resurrect his robot costume from last year.  Alicia purchased smaller pans to make it a bit less bulky.  This year he did all of the writing on it.  Mrs. Jones took him around to show off his costume to a couple of other teachers.  Reports are he was the only one afforded this treat.  Guess it was because it was a hand crafted costume that he was involved in. 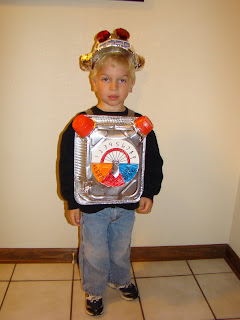 I dressed up as Bob-the-builder for work.  We had quite an eclectic group.  Everything from vampires to a monk to a gypsy fortune teller to my favorite.  Henry Paulson complete with Golden Parachute. 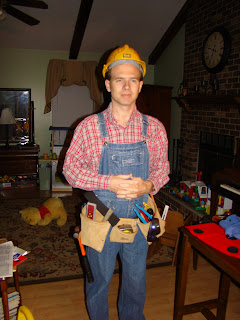 We trick-or-treated with our friends the Rossie's and Henderson's (folks from work).  We met up with the Strasslies (pretty sure that's spelled wrong) from down the street.  All the kids had fun in the backyard. 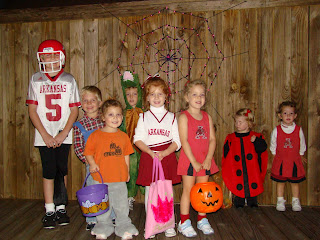 I know, I know I need to blog more but I've been busy. Perhaps I'll get stuff posted tonight. Or perhaps not. We'll see.
Posted by Sam at 2:06 PM No comments: