We took a couple of days off from work during spring break and towed Nana and PawPaw's palace-on-wheels (aka The Camper) to Crater of Diamonds State Park.  It was a learning experience towing a 27' trailer behind the Excursion but our 40+' of traveling steel made it down the road just fine.

Saturday afternoon Paw-Paw towed the camper to his house we could load it, learn about it, etc.
Sunday morning I made a reservation for us for Tuesday and Wednesday night.
Tuesday morning we got up, loaded everything in to the Excursion and headed west to get the camper.  We got all hooked up, stowed, and headed out.  A little over 2 hours later we got to Crater of Diamonds, got checked in, and headed off to our campsite.

It took a couple of shots to get it backed into our campsite but after surveying what it was Alicia was trying to get me to make the camper do it worked out much better.

We got all setup, hooked up, etc relatively quickly.  Emily and I went off to find the playground (Eli wasn't feeling well).  We had decided to treat the kids to foil packs on a fire so I built a fire, then we played games, etc while waiting for them to cook.  Either the fire was hotter than I thought it was or I left them on too long, or some combination of the 2 but let's just say they were a bit on the done side.  We ate what we could of them and then broke out the hot dogs.

Wednesday morning we awoke to a beautiful day.  We had breakfast and then hiked over to the mine.  We all searched for a while, then Emily discovered a hole with "play-do" in it (clay).  She was hooked.  Eli joined in the fun as well.  We found lots of jasper and mica but unfortunately no diamonds.  After the fun meter had peaked we headed back to camp for lunch.  After lunch we headed off to one of the trails that took us down to the Little Missouri river.  The kids took their bikes and had a big time.  We then headed back, played on the playground some more, then grilled burgers for dinner.

Thursday morning we got up and had to turn the heat on.  We did around a bit then started packing up.  We got on the road shortly before noon.  After an uneventful trip back we backed the trailer into its parking spot at the Byrd Compound.  Took a bit of finagling to get the trailer hitch to release but we then headed back home to unload.

I'll get some pictures up tomorrow.
Posted by Sam at 1:35 AM No comments:

Emily has a new window

In our continuing home improvement saga we decided to tackle Emily's new window when we had two full days. Good thing, it too two FULL days. But, she has now been upgraded from a single window to a double window.

Required a new header (ohy, that was a chore).

Our todo list for Spring Break is long
1. Finish trimming and painting downstairs windows
2. Finish prepping for upstairs windows
3. Install some of the upstairs windows (requires for them to arrive)
4. Paint Emily's room
5. Go camping
6. Yard work
7. Picnic at the park
8. Bike rides

Saturday's accomplishments
1. Primed 1 side of window grids (12) and 2nd side of 4
2. Started prepping camper for trip (including Home Depot run for a new faucet)

Sunday's accomplishments
1. Reserved a campsite at Crater of Diamonds State Park for later in the week
2. Primed 2nd side of window grids (8)
3. Painted Emily's room (ceiling and walls) (walls are yellow - surprise surprise, ceiling is blue)  We may add clouds or glow-in-the-dark stars later.

More updates (and pictures) as the week unfolds
Posted by Sam at 11:46 PM No comments: 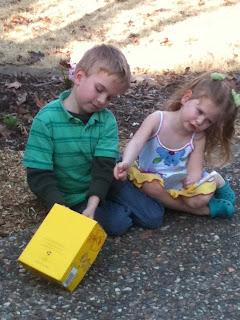