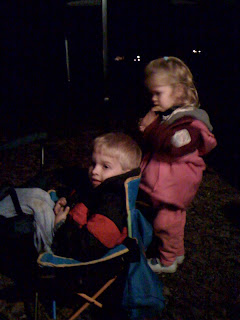 Eli's Cub Scout Pack had a family campout at Maumelle Park. We borrowed a 4 man tent from family friend Joe (thanks Joe). We borrowed sleeping pads from Paw-Paw (thanks Paw-Paw). Alicia bought sleeping bags for her and the kids. You know the good ol' Coleman specials. They'll do great for our purposes.

So we went and setup camp. A bit later we built a campfire and taught all the kids how to make 'Smores. Most folks ate before they came. One of Eli's fellow Tiger's dad's owns/runs Markham Street Bar and Grill, they show'ed everyone how you cook on a fire. They had baked potatoes, corn on the cob (OK, he used a butane stove for the shrimp he cooked).

The kids got to stay up until 8:30 or so. The picture above is from shortly before we headed off th brush teeth. We hiked to and from the bathroom starting at 8. Eli learned how to brush his teeth with his finger because he left his toothbrush at home (brought the holder though). It was probably 9 before the kids fell asleep.

At about 3am we awoke to find Eli crawling across our faces (how he missed Emily is still a mystery). He said he was trying to get back into his bed. We turned him around and sent him back across the tent. Then the kids awoke bright and early at 6.

Kids enjoyed a smörgåsbord of various breakfast items to include hot chocolate. They then played with other kids on the playground until about 11.

Alicia and I broke camp.

Alicia took Emily home for a nap while I took Eli to the Pinnacle Mountain Rendezvous. He had an OK time. If we go again we'll spend more time watching the blacksmith (he really enjoyed it) and less time looking at things that they want you to pay money to do that you can do just as well at home.
Posted by Sam at 8:53 PM

Is that the teaser? Tell us all about it!