A good day to climb a mountain

Happy New Years. We may start a new tradition of climbing hills on new years day. Last year we climbed the Olympic hill in Munich, Germany. This year we climbed Pinnacle Mountain.
First some background. We've been using a marble based reward system for the kids for the past 6 months or so. It works kind of like this. You do good things, you get rewarded 1 or more marbles. Do bad things, you loose 1 or more marbles. When you fill your marble jar up you get to trade it in for money as well as a family outing. We started out with 2 rather good sized jars. A couple of months ago we decided to downsize to make it a more reasonable goal. Both kids polished their jars off last week.
Eli decided for his family outing he wanted to climb Pinnacle Mountain (2nd highest peak in Pulaski County according to the literature). It's a nice 1 1/2 mile round trip treck. The 1st half isn't too bad. The 2nd half is a boulder field that's challenging to adults and mountain goats. The kids tackled it though (and conquered it I might add).
We were joined on the climb by several exercisers (one older gentleman wearing way too little clothing for the temperature passed us several times, he said he climbs it 6-10 times a day). Don't get in their way, they will run you over - or will cut around you off the trail just so they don't have to stop.
Here's some pictures. You can see the fun the kids had climbing the rocks. 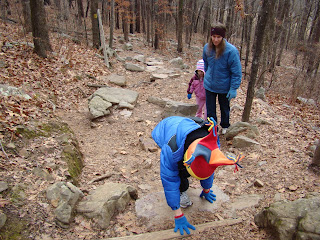 Here's Emily "bouldering" her way up 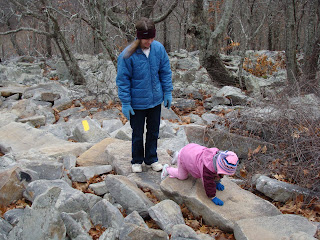 A nice fellow at the summit took our picture for us. It was chilly up on top so we didn't spend much time (plus it was time to get down so we could eat lunch). 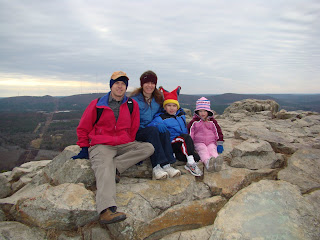 Wow! I thought Emily was going to stay at the base and play on the new playground! Looks like a great new tradition. I'll stay below with the cocoa.