Closing in on the last one

First stop was Lake Catherine State Park.  Located on the shores of one of several lakes clustered together in Central Arkansas.  When I first got to where I thought the cache was I noticed some signs marking the trail closed due to hunting, hummmm, not good.  Then I looked down at the fuzzy jacket I was wearing, hummmm, deer colored, good thing I'm gonna be in State Parks today.  Rechecked the GPS and saw I didn't need to take that trail after all, cache acquired, time to move on. 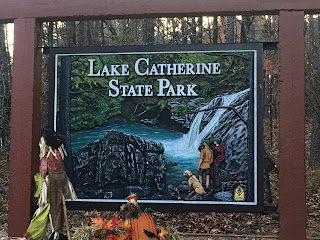 Next stop was DeGray Lake Resort State Park.  On the way it occurred to me that I'd forgotten to grab the bagel I'd intended to eat for breakfast, swung by a Pilot that just so happened to have a Cinnabun stand inside, grabbed one of those and a thing of chocolate milk, problem solved.  Now onto the park.  One thing I realized I failed to take into consideration was that the milages between things was basically park entrance to park entrance.  I failed to take into consideration the time required to drive within the park, more on this later.  This cache was located in an interesting place at one of the swim beaches, let's just say I'm glad my arms aren't any shorter than they are. 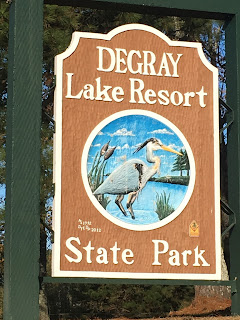 The next target was Daisy State Park, located on the shores of Lake Greeson in Daisy, Arkansas.  Looks like a nice hidden gem of a place to come spend a weekend. 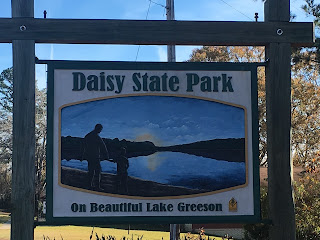 Onto Cossatot River State Park - Natural Area, I missed the turn that my GPS wanted me to take onto a Weyerhouser road to get to where the cache is, as luck would have it I wound up at the park sign that I needed to take a picture of anyway, and there was a sign pointing me towards Cossatot Falls.  Six and a half miles of gravel road later (remember how I mentioned I'd forgotten to factor in traveling to the actual caches?) I was at the falls, and quickly found the cache.  The water was down so no-one was playing in the falls, but I can see how boaters could have a lot of fun there. 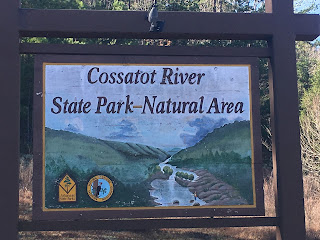 Time to head back east.  Quick stop for lunch on the way to Lake Ouachita State Park, then hunting for the cache.  This was the most challenging of the ones I found today, very sneakily hidden. 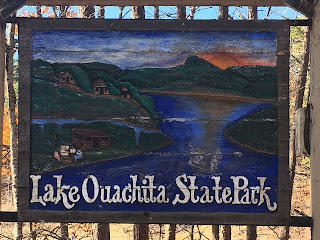 I plugged today's finds into my spreadsheet and determined that my answer was indeed inside of one of the State Parks (good sign).  I headed towards it hoping to find stage one today, then the family come back another day to find the actual finally.  My luck ran out after having found 5 caches today.  I reached out to some fellow cachers who have finished the challenge to check my numbers, so far I've received confirmation that I'm off, now to see by how much.  Stay tuned, the end is near.
Posted by Sam at 11:21 AM