On the road again

It's Spring Break in Arkansas which must mean it's time to get back to geocaching.  This weekend took us to 6 parks via 450 miles or so of road.  For those who don't know, South Arkansas is timber country.  We saw LOTS and LOTS of timber.

The weekend started with a drive down to Cane Creek State Park.  After briefly confusing the ranger because "our name wasn't on his list" we got moved into our campsite for the weekend.  One thing we discovered is either there was a family reunion of sorts going on, or the folks around us knew each other from camping/fishing.

Saturday morning after packing a sack lunch we started our quest by obtaining the park's official cache.  We then headed off on a leisurely jaunt through the woods to one of the 3 swinging bridges in the park.  That was about a 6-7 mile stroll, the kids were pretty zonked by the time we finished.  We decided a drive in the car to another park to allow some rest time was in order.  So, we headed on over to Marks' Mills Battleground State Park (one of 3 stops on the Red River Campaign).  Oddly the park itself isn't where the skirmish occurred, that's a mile down the road, must have been where the state could get some land.  Once back home we road bikes for a while, working on a puzzle cache, we figured it out but never actually went to collect it, perhaps we'll be back some day. 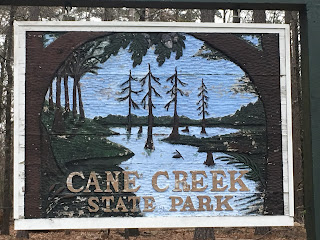 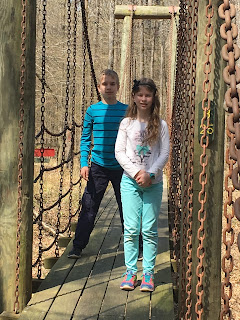 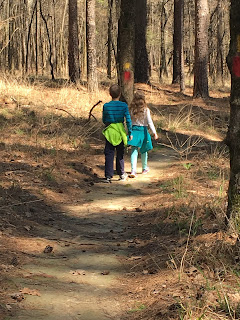 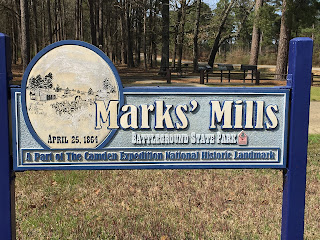 Sunday morning we packed up and headed out on a rather circuitous route home.  Everyone heads out South to go North, right?  Our first stop was Moro Bay State Park.  When we arrived we were curious why the cabins were built up on stilts, then we found this pole.  Note that Emily's feet are about 20 feet above the current water level, that's a lot of water!  The kids had fun exploring the ferry that had crossed here until 1992.  And we learned that flammable and inflammable mean the same thing, who knew. 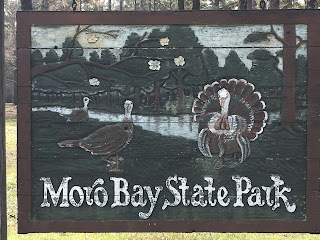 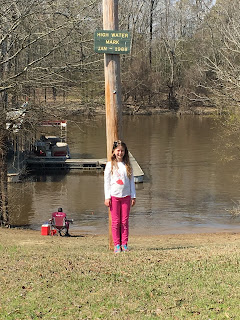 Next stop was the South Arkansas Arboretum State Park.  The azaleas were in bloom, though not much else was yet.  It was still a nice stroll. 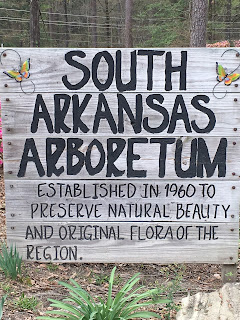 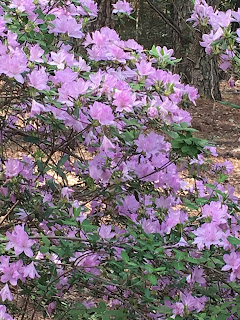 Just down the road we stopped at the Arkansas Museum for Natural Resources.  Built near the crater of a sizable blowout it chronicles the rise and fall of the natural resources market in Arkansas.  Primarily timber and oil. 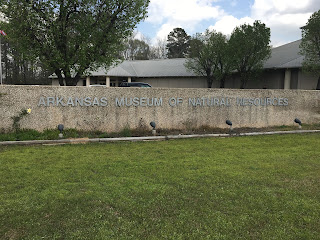 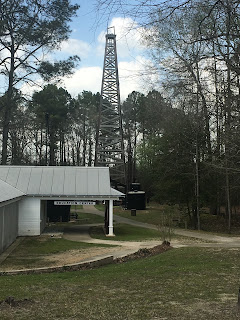 Turning north towards home we had one more stop to make, this time at Jenkins Ferry Battleground State Park.  The last stop on the Red River Campaign trail.  It was at this stop that the Union Army finally escaped the Confederate Army by destroying the temporary bridge across the flooded Red River. 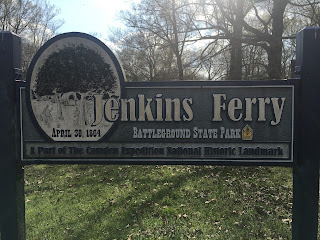 Hopefully we'll be finished this fall.  Waiting until October for Queen Wilhelmina because of the migrating butterflies that stop by.