So we went on vacation. After having a very successful trip through Germany and neighboring countries at Christmas we decided we'd use the same travel model. Stop every couple of hours. 1000 miles in 3 days, no big deal. Thanks to Opa's 3+ months living in a LaQuinta in Ada, OK we got free lodging during our travels to Kissimmee.

The first bickering started before we got to Brinkely. For those not around here, that's about an hour. Not good when you've got another 15 hours to go.

The first stop was Mud Island in Memphis, TN. They have a 5 block long model of the Mississippi. The kids enjoyed it. 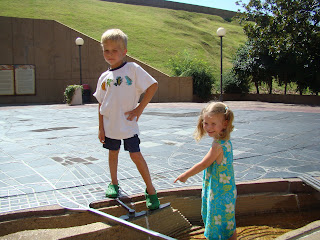 Then it was onto Birmingham. The kids were giddy over the pool. Go figure.

The kids shared a bed. Emily stays still and sticks to her side. Eli is a world class bed hog. 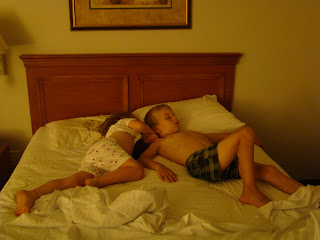 The next morning it was onto Valdosta, GA. On the way we stopped in Troy, MS at the Pioneer History Museum. Lots of neat stuff. 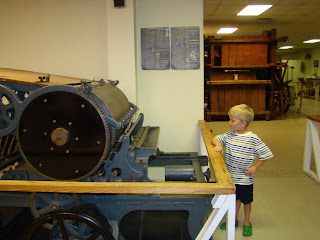 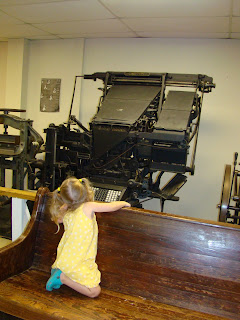 In Valdosta we stayed at a new LaQuinta. They have a free nightly cocktail and ice cream social. Yummy. At the "bar" there was a sign asking folks to limit themselves to 4 drinks.

After 2 8 hour days we were looking forward to a short day. First we drove a couple of hours to Gainsville to their Natural History Museum. It's free plus logs of really cool stuff. This is a REALLY big shark. Thankfully, it's extinct. It makes a great white look tiny. 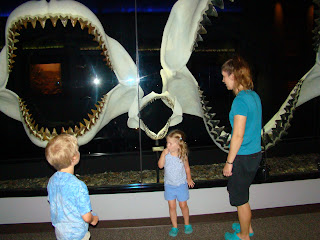 They have a really cool butterfly exhibit. 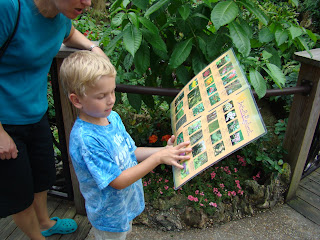 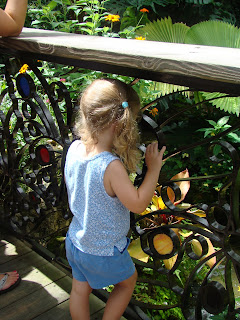 Then it was onto the house that mom and dad had rented.

Sunday was a rest day for everyone. We just hung out at the house. Played in the pools (yes, there were 2), etc.

Monday we headed off to Sea World. A good time was had by all. The dolphin show was the best but the Shamu show was still pretty cool.

Tuesday was another rest day.

Wednesday we tackled Magic Kingdom. We hit the gates at 9am sharp. About 12:30 we headed home for naps. We got back about 4 and powered through until the Electric Light parade. The kids really were great and had a good time.

Thursday and Friday were rest days again. We did briefly goto the LEGO Store at Downtown Disney where the kids made LEGO cars to race and bought a LEGO truck to share. 1/2 the gang headed home Friday. We stuck around until Saturday.

We'd planned on spending 2 days driving home but as we were approaching Montgomery (1/2 way) at 2pm we decided it was too early to stop. We could easily make it to at least Birmingham (1.5 hours away). We then decided we may as well just drive all the way home. We made the entire trip in a little over 16 hours (with stops).
Posted by Sam at 9:28 PM

Sounds like a really wonderful trip. Funny how on the way home you can decide that it is better just to plow through and keep going. I've done the same. When we drove from Florence OR to Portland this weekend with our bikes in a U-Haul, we called to see if we could just drive all the way home. It would have been too expensive, so we spent the night in Portland and then took the train home Sunday as planned. It would have been nice just to keep driving on Saturday!